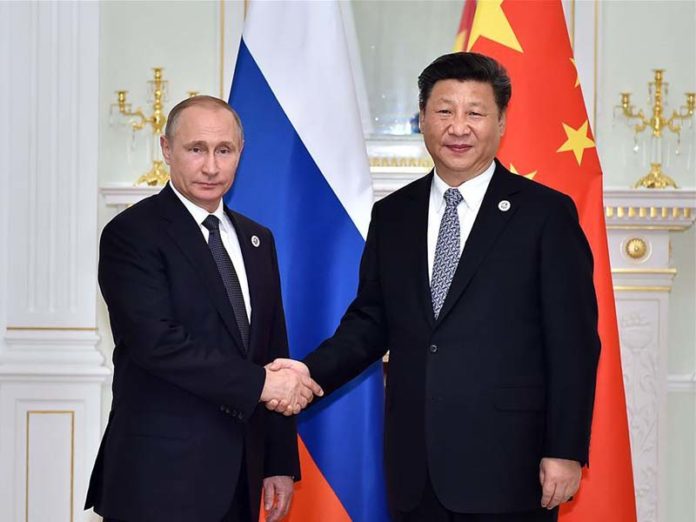 Why is Peace not breaking out, when the vast majority of the world’s populace does not want war? Peter Koenig sheds light on how a China and Russia led economy can be the world’s key to an economy of peace. The future is in the East, and the “masters” know it.

Why is the world one huge fireball of hostilities, conflicts, threats of economic sanctions, propaganda of lies and mind manipulations, fear-mongering – killing – massive killing – 12-15 million people killed since 9/11? – Why is that? And all provoked and executed by ONE country, and her vassals in the form of NATO, stooges of Brussels and the Middle East, and their prostituted proxies, paid mercenary whores, Islamic State, by the one Rogue Nation the world is subjected to – the United States of America.

All that at the cost of trillions of dollars, tax-payers’ money – really? – More likely privately FED, Wall Street created fiat money, pyramid money, based on usury and debt, subjugating debt to be pillaged from the ordinary citizens; but government debt never to be repaid, as per Alan Greenspan (FED Chairman, 1987-2006) to an exasperated journalist who asks, when will the US ever pay back its huge debt? – “Never – we will just print new money”. – So, is it really “tax-payers’ money”? – Would tax-payers’ money be able to pay for these trillions and trillion spent on conflicts, wars and hostilities – hundreds of billions spent on propaganda of deception and lies to promote endless assassinations around the globe? Hardly.

Why is it that we live willingly and knowingly in a fraud and greed-economy? – Is living in deception the illusion that keeps ultra-capitalism alive? – That leads us to ever higher grounds of avarice – ending in all-destructive fascism? – Possibly in a globe-annihilating mushroom?

Why do we worship war, if at least 99.99% of the peoples of this globe want peace?

Why do we tolerate such atrocities imposed by one nation – no longer worthy of the term “nation” – destructions of entire countries, civilisations, the cradle of western history? Obliteration of livelihoods for generations to come? – For nothing else but gluttony, for insane accumulation of material goods and power? For world hegemony of a few? Why do we tolerate Inhumanity as our “leadership”?
It is well-understood that such ‘leaders’ are put in place not by elections, but by fraud – why do we not throw them out? – Why do we bend over still believing in the lies of democracy – if in the back of our minds a little spark of conscience tells us exactly that we are being betrayed by our governments, not once, not twice – but ALL THE TIME?

And this refers to WE in the WEST.

We know that we are living a falsehood. Is falsehood tolerable for the comfort of not moving out of our armchairs, out of the cushioned blue-pilled matrix, where we would have to face our own reality – that of having lived a life of lies for most of our existence? – Wouldn’t that recognition be a first step to our freedom – FREEDOM – freedom from want, freedom of mind, like in liberty to love our fellow citizens – freedom to embrace Peace?

Wouldn’t that recognition be a first step to our freedom – FREEDOM – freedom from want, freedom of mind, like in liberty to love our fellow citizens – freedom to embrace Peace?

Why are we not finishing off this monster – which is itself only a hologram, directed by a deep dark state, invisible to the naked eye of common citizens and a shadow government of tyrants, torturers, killers, psychopaths – that direct our everyday lives? – They, these triangle-framed one-eyed underground beasts have to live in secrecy, in darkness. Why?

Are we afraid? – Why can we not shed that fear for a little bit of courage – and find back to human solidarity against this atrocious abuse – the worst ever since the Roman Empire and probably much longer, ever since our modern times of history, dating back to the ascent of monotheism, some 5000 years ago? When the Akkadians overthrew the Sumerian civilisation, where women had their natural initiating roles and were equals to men. Monotheism changed all this.

Let’s be clear – nobody is to be wished death; not the murderers of the Pentagon, or of the CIA, NSA, FBI – not the slaughterers of the Military Industrial Complex – nor the financial assassins of the FED, Wall Street, nor the whores of the mainstream propaganda killer “fake news”. No – they will eventually face their own Karma. In the meantime, let them live and drown in their own self-made swamp, or rather their suffocating cesspool of sewer.

But we do have to get rid of them – get them out of our lives, get them isolated from our well-being, human well-being, not greed-well-being, as we live today. They must be marginalised. – How?